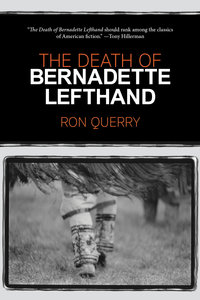 The Death of Bernadette Lefthand

A good story is made up of a collection of elements, the most powerful is that magical thing called voice. Who is speaking and what is the storyteller saying from the heart to engage the reader? In The Death of Bernadette Lefthand, author Ron Querry nailed it with Gracie. As the primary source of insight into Bernadette’s life and tragic death, Gracie can’t know everything, so we get to hear from a few other perspectives. But at the core, this is as much Gracie’s story as it is Bernadette’s.

Through Gracie’s eyes we get to see her sister’s world falling apart, attributable to human foible as much as anything, but assigned to fable and witchcraft Native American style, with Singers/medicine men making chilling appearances that portend no good thing.

Gracie reveals the meanness of living on a reservation with little to rely on other than family and tradition. She is not described, but you get the sense of a young woman whose appeal lies in the heart, not in outward appearance. Without guile or jealousy, she concedes to her lovely sister all the attributes she does not have. Her admiration of Bernadette’s spirit, her beauty, her charm, her talent dancing to the music of the drums, all serve to create the love story between sisters. Gracie seems content in Bernadette’s shadow, as though it is the perfectly logical place for her to be. In this shadowland, perhaps she sees what’s coming before anyone else can as Bernadette’s handsome Navajo husband’s life takes a nosedive into the bottle.

The bittersweet truth of the novel is the unanswered question of whether the bad buy gets his comeuppance. It’s left to the reader to decide, but I like to believe that in this good-vs-evil story, evil met his doom in fitting Native American fashion.

The Death of Bernadette Lefthand was first published in 1993 and won the Border Regional Library Association Southwest Book Award and the 1994 Mountains and Plains Booksellers Association Book Award. It has since received critical acclaim for the author’s ability to depict the intersection between white and native worlds.

Regarding this 25th anniversary edition of The Death of Bernadette Lefthand, Kirkus Reviews wrote: This…beautiful story deserves to be back on the bookshelves of American readers with its innovative, organic use of Indigenous prose form and strong, lovely personalities.

The Death of Bernadette Lefthand is published by Cinco Puntos Press and is available online and in bookstores.