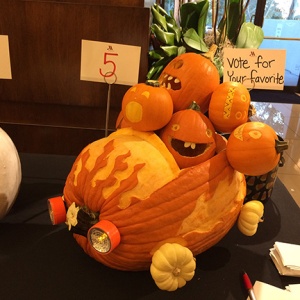 Hootie tunes and shrieking screams
scary thingies in your dreams.
On this haunted, hunted night
what next on tap will give you fright?
Creeping, leaping, jumping, sneaking
is that a ghost at whom you’re peeking?
Tiptoe back, slither down the hall
when spooky phantoms on you call.
Get into a warm and comfy bed,
pull the covers o’er your head.
Sweet visions conjure into being,
ignore the specter on the ceiling.
Come out and play, he moans,
Halloween lasts but a day, he groans.
Laugh, laugh away your silly fear,
the pumpkin grin will bring you cheer.
Gliding ghouls are hosts to you
waiting, waiting, and then – BOO!

Except for the photo, this is a retread from last year. The picture was taken at a hotel in Albuquerque where the employees were having a contest for the best carved pumpkin. They were all good, but this was a stand out. It’s the one we voted for :). Have a safe Halloween.

Shelby thought she was oh so original. Why would anyone else in her right mind show up at a Halloween costume party dressed as an eggplant? Yet, there she stood, long of leg, slender of arm, wearing an exact, exact duplicate of Shelby’s costume. In her mind, the second Shelby saw the other purple veggie, she dubbed the dubious duplicate Evil Eggplant.

One of Evil’s delicate hands held a glass of red wine, which she sipped through a straw while she stroked the arm of the man in front of her with the other. The costume was not designed for food consumption, as Shelby had learned when she tried to eat a chip with guacamole shortly after her arrival. And now, looking about as ridiculous as Shelby felt, there was her twin having a high old time with – unless she was very much mistaken – Shelby’s objective for the evening.

Jared Fields. Her boss in the workplace, the man of her dreams in her night time fantasies. He was dressed as Superman and had the pecs, abs and overall physique to carry it off. No padding on that bod! The fake black-rimmed retro glasses did nothing to conceal his square-jawed good looks. Clark Kent didn’t hold a candle to Jared Fields.

Evil Eggplant had him laughing at something she’d said. Shelby edged closer, hoping to be inconspicuous in the crowd of witches, goblins, ghouls, the undead, superheroes, jack-o-lanterns and miscellaneous other identifiable and unidentifiable Halloween freaks and geeks.

Jared the amateur gardener seemed quite taken with Evil Eggplant, which – of course – had been Shelby’s plan all along. Not for Evil to have him enthralled stealing Shelby’s thunder, but for Shelby’s quirky costume to captivate him with curiosity if nothing else, which she hoped would lead to something else.

With no other plan surfacing in her mind she stepped up beside Evil and accidentally bumped her wide bottom half. The result was Evil grabbing for any stabilizing body or object to keep from falling over. Superman reached for Evil just as Shelby stepped in front of him giving the appearance she was trying to help, and she was, really. Kind of. More or less. Of course she was limited in her ability to assist, given she had the same limitations that afflicted Evil, bottom heavy weight distribution and four-inch lime green high heels.

Damn! Her doppelganger had copied every aspect of her costume right down to heels, matching tights and the glittered stem sitting atop her “head” like a couture hat.

The hat now lay on the floor flattened and skewered by a buxom witch wearing ruby slippers with hooker heels.

Two ghouls and Green Lantern helped Evil up and retrieved the hat. Evil batted it away and turned on Shelby.

“You bitch! You did that on purpose!”

“Did what on purpose?” Shelby asked calmly. Inside a fuse had ignited.

“Bumped me! You did it on purpose!”

“I most certainly did not. I tried to keep you from falling down.” Calm. Calm. Calm.

“Ha! AND you stole my costume idea.”

Shelby fumed but kept her mouth shut. She now knew the identity of the real thief in the room and the knowledge pierced her heart. Caroline Hopper. Her workplace rival and after work best friend. She should have known. They relentlessly competed for everything on the job: promotions, projects, perks, benefits, raises. Was it any surprise her friend would compete for the big prize?

But Jared wasn’t a prize to be won. He was the love of Shelby’s life, or she wanted him to be. Yes, she had a wild and crazy crush on Jared, who wouldn’t? Just look at the man! But it was more than that. She admired his dedication on the job and how he spent his time away from work. They’d stood shoulder to shoulder at soup kitchens, spent frigid hours distributing blankets to the homeless on cold winter nights, and many a Saturday sorting through thrift shop donations culling the good stuff from the crap. Caroline had no time for such nonsense, as she put it. “Lazy bums need to get a job and stop being victims!”

And then there was the time Jared tricked her into going roller skating after volunteering with the women’s shelter and another time he’d convinced her to spend an afternoon working with him in the south side community garden, which turned out to be way more fun than she ever imagined it could be.

Shelby regretted all the times she had confided in her best friend about how much she admired Jared and wished he would think of her as more than an employee or as a good friend with off-the-job mutual interests. Of course she had shared the eggplant costume idea with Caroline.

Instead of responding to her friend’s accusation, Shelby turned and walked away. She could never compete with Caroline, who was more than a match for Jared in looks and business savvy, charm and wit, class and sophistication. Shelby was smart and creative so vying with Caroline on the job was a piece of cake, but in terms of physical attributes, Caroline was in a league of her own. Besides, “winning” wasn’t Shelby’s goal. She wanted Jared’s unconditional love, bells and whistles, hearts and flowers and happy ever after. And at least three kids. And a dog.

By the time she had said her thank yous and goodbyes to her hosts (as her mother taught her to do come what may), and had reached the elevator, she desperately wanted to rip off the stupid costume so she could dry the tears streaming down her face. The most important competition of her life and she was just walking away? But it wasn’t a competition, was it? If she had to fight for some guy, did she even want him for goodness sake!?

“Absolutely!” she said aloud. She whirled around just as the elevator arrived and walked right into Superman’s “S” and his strong open arms. He backed her into the elevator and as the doors closed, whispered, “You know, Shelby, eggplant is one of my least favorite vegetables, but I’ve always been kinda crazy about what’s inside this one.”

THE ELDERS
Aging is a bitch.
If you’re lucky
or have been wise enough
to stay in good health,
it can be a romp
full of all the imagined
golden oldie experiences.
Mostly, we’re tarnished
a bit wobbly and frail.
Don’t discount us
because of age
or disability. We are the elders,
full of things you should know
to avoid bumps in the road
and byways that lead to disaster.
The past is full of lessons
only elders can teach.