She stands
in the middle
of a war-torn street,
Ukrainian flag in hand,
angel wings over her
puffy coat,
donned for warmth,
no protection against
bullets and bombs.
I weep for her innocence
and pray for her protection.

And an end
to senseless war.

Ray John de Aragón is a writer who uses careful research and stories to bring life to New Mexico’s deep and wide history, whether he is delving into fiction, writing nonfiction, or creating a melding of the two. De Aragon broadens the horizon of his prose in every book he writes. He is prolific and dedicated, taking storytelling to the next level. History is the story of a people, a region, an event. In the foreword to New Mexico in the Mexican-American War, by Ray John de Aragon, former first lady of New Mexico Clara Apodaca writes: New Mexico Hispanic women have blazed trails in all walks of life – government, business, education, the arts and the military… The myths this book shatters will hopefully lead to a better understanding and appreciation of the real history.

In this Q&A, author de Aragon talks about his latest book and his journey as an accomplished author of history, myth and the magic of New Mexico.

Q: Talk briefly about what you’re doing now, in addition to writing.
Ray John: Right now I’m only concentrating on my writing. I’m at the point in my career that national editors as well as publishers are very interested in my work, and that is quite exciting.

Q: What drew you to write about New Mexico legends, history and folklore?
Ray John: Coming from northern New Mexico I grew up hearing about our Hispanic heritage, history culture and traditions. I decided that writing about the history, folklore and legends that have been passed down for many generations in local families should be my focal point.

Q: How do you carve out time to write when you are already busy with other work?
Ray John: I am a full time writer. Turnaround on my books from conception to release is six months. I have two other contracts. I have eighteen published books that sell quite well. That keeps me very busy.

Q: Which is the most exciting, the writing or the research?
Ray John: Both the research and the writing is just as exciting. Finding material that has not been previously published, and getting these new findings out to the public eye is truly fruitful. Especially so, when I receive great reviews on my work, and pleasant comments. 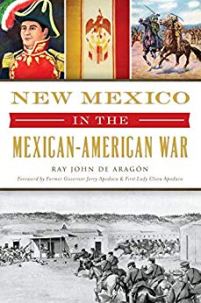 Q: What have you learned about yourself in the course of developing story or project lines?
Ray John: I’ve learned that my writing skills have developed professionally. I published my first book nationally when I was 28. I listened to and followed the excellent advice I was given by S. Omar Barker and other established authors, and got published. I feel I have grown in my work to the point that my writing pretty much goes directly from writing to publishing.

Q: You are an oral storyteller in addition to being a writer. Which is more challenging?
Ray John: Both working as a presenter and writing are very challenging. I get tremendous joy from both when I accomplish what I have set out to do. For example, if a presentation is followed by enthusiastic questions, loud applause, and great comments after, that is very enjoyable and very satisfying.

Q: Which do you get the most enjoyment from and why?
Ray John: My New Mexico history books are centered on correcting much of the misinformation, fabrications, falsehoods, and fiction that has been passed on by previous writers as historic fact about the Spanish/Mexican history and eras of our state. I wrote about New Mexico in the Mexican American War to clear up this distorted history.

Q: Some of the illustrations note they are from The Author’s Collection. How does collecting historical memorabilia help you in writing?
Ray John: I have always been interested in historic photos, images, diaries, and documents. When I was eleven years old my father had a large case with family photos from Las Vegas, NM and environs, and documents and papers dating as far back as the eighteenth century. Once when my folks were not at home, I took this case down from a high shelf and went through them. My father got home and caught me. Rather than being punished, he said if I was interested I could have them. I have been collecting since then. Many of those first family photos and documents are in my books.

Q: What do you want your readers to know about you?
Ray John: I like for my readers to know that I have always striven to reveal the truth about our history, not the wild ideas someone came up with at one time that has been rewritten, or quoted by others and then endlessly perpetuated. They also theorize about what may have happened, rather than spend hours researching.

Q: More about your writing experience and where your books may be purchased.
Ray John:
My books are available on-line, through national book chains, through New Mexico state local bookstores, or as E-books.

The book I’m completing now is New Mexico Land Theft, a History of Fraud and Deceit. I believe this will be another eye-opener. I like for people to also read the actual words from both the protagonists and the antagonists in my books. Thereby they can reach their own conclusions, not the biased and prejudiced interpretations written by many others. When I read what Abraham Lincoln said about the War with Mexico, I was stunned. I just had to quote his words.

Last October when my Haunted Santa Fe was released, I had thirteen book signings, four radio shows, two TV shows, and I was covered by several national publications. The most in one month in my career. This July I’m featured in Albuquerque Magazine and I have four out-of-state book signings.

This year for the period of Lent, instead of giving something up – which I never stick to anyway – I decided to pass something on. I’m going about it the easy way, emailing people in my circle with a thank you. This is not a “crowd” thank you, but individual notes sharing appreciation for who they are and ways they have touched my life. Some are women I feel a deep kinship with, others are women I’m getting to know. What they all have in common is kindness. Aesop wrote, “No act of kindness, no matter how small, is ever wasted.” In a world where we are blasted by one shock wave of disastrous global events after another, it is more important than ever to let others know how their kindnesses have made a difference.