Gate 76, by Andrew Diamond, is about loss and redemption. The characters are stark, and for the most part – it seems – soulless. But are they? Gate 76 explores the dark side of life with a man who finds no good in the world. He’s seen it all. Lived it all, and he is not impressed. Well-meaning do-gooders who don’t have a clue, really push his hot button.

He most certainly doesn’t see his own goodness, the spark of caring that sets him apart from his brutal upbringing. Ex-boxer Freddy Ferguson has been betrayed too many times by people who should have been looking out for him.

And then he sees a woman in line at an airport, ready to board a plane. She appears to be under duress. He keeps watching. Something isn’t right. It’s her eyes, maybe, wide with fear, yet determined. She’s terrified, he can sense it.

That’s the beginning of a heart-pumping tale involving the bombing of an airplane, political corruption, prostitution, drugs and dirty lawmen.

In his role as a PI, Freddy is tasked with sorting through the passenger list of the downed plane, looking for clues, but he can’t get the woman out of his mind. She wasn’t on the plane that exploded, he knows that, but where did she go? Why was she afraid? Freddy doesn’t believe in much of anything not even justice. He does believe in following his instincts and doing the right thing, even when it may lead to his destruction.

Andrew Diamond’s novel Impala won the 24th Annual Writer’s Digest Award for genre fiction and the Readers’ Favorite Gold Medal for mystery. Amazon.com editors picked it as a best mystery/thriller of the month upon its release in September, 2016, and IndieReader chose it as one of the best indie novels of the year.

My rating: Thumbs Up x 4 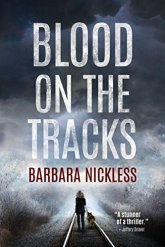 Stop. Think for just a minute – if you can – about the worst that can happen to you. Do you believe it is some dread disease, getting hit by a semi walking across the street or finding out you’ve been betrayed? Now project that horrific thought onto someone you trust, someone you would lay down your life for, someone who has laid down their life for you… someone whose body you’re going to have to pick up piece by tiny piece to the point the only way to identify that someone is through DNA, because there’s not enough left to ID any other way.

Those are the memories Railroad Police Special Agent Sidney Rose Parnell lives with day in and day out. As an Iraq war vet whose job was working in Mortuary Affairs, Parnell returns to civilian life seeing ghosts, suffering from somewhat controlled PTSD, and generally attempting normalcy in a chaotic world.

Her problems didn’t begin in Iraq, but Iraq didn’t make them any better. Now she is faced with a mystery associated with the Burned Man, a badly wounded and scarred vet whose fiancé has been brutally murdered. Parnell, and her war-zone trained K9 partner, Clyde, are brought into the investigation by the Denver Major Crimes unit because of her particular expertise with rail riders, hobos who crisscross the country stowing away on trains. The Burned Man, the prime suspect in the murder, is a known rider and Parnell has a sense of who he is as a damaged veteran, and what he will do next.

Her investigation, complicated by an icy Colorado winter, takes her into the dark world of a savage gang of rail riders, who she believes are responsible for the death of the Burned Man’s fiancé. But there is so much more at play: a secret from her time in the military, family loyalty, and her own tarnished childhood.

This is a complex story crafted with deliberation. Sydney Rose is a heroine who doesn’t want to be thought of as such. She is admirable, tough, and takes ownership of her flawed life. She lives by her own code and with as much integrity as she can muster against odds that sometimes seem stacked against her.

Hard to believe Blood on the Tracks is Barbara Nickless’ first novel. It is indeed a page-turner that keeps you reading. The characters are people you care about, or who you can’t wait to see dealt justice, even if it’s the vigilante kind.

And this is just the beginning…

From the Publisher
Barbara Nickless is an award-winning author whose short stories and essays have appeared in anthologies in the United States and the United Kingdom. An active member of Mystery Writers of America and Sisters in Crime, she has given workshops and speeches at numerous writing conferences and book events. She lives with her family in Colorado. Blood on the Tracks, which won the Daphne du Maurier Award and was a runner-up for the Claymore Award, is her first novel.

“Blood on the Tracks” on Amazon.com

THE ELDERS
Aging is a bitch.
If you’re lucky
or have been wise enough
to stay in good health,
it can be a romp
full of all the imagined
golden oldie experiences.
Mostly, we’re tarnished
a bit wobbly and frail.
Don’t discount us
because of age
or disability. We are the elders,
full of things you should know
to avoid bumps in the road
and byways that lead to disaster.
The past is full of lessons
only elders can teach.